The Trumpet and the Bassoon 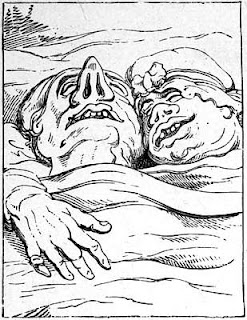 The Trumpet and the Bassoon (1796) by Thomas Rowlandson.

In cases where some people hear pleasing sounds, others hear grotesque noise. Noses and mouths are common in grotesque literature, paintings, and music. While we often think of the grotesque and the monstrous as visual, there is in fact a sonic element that plays on moaning, shrieking, roaring, snarling (satire), and dull snoring. Noses are a common feature as talking phallic doubles... 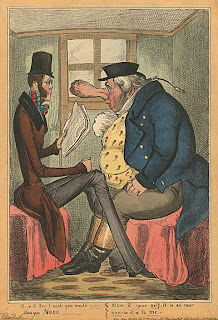 "We are interested in the theme of the nose itself, which occurs throughout world literature in nearly every language, as well as in abusive and degrading gesticulations." (Bakhtin: 316)

" [...] the meaning of the grotesque image of the nose: that it always symbolizes the phallus." (Bakhtin: 316)


"Of all the features of the human face, the nose and the mouth play the most important part in the grotesque image of the body;" (Bakhtin: 316)

"The grotesque face is actually reduced to the gaping mouth; the other features are only a frame encasing this wide-open bodily abyss." (Bakhtin: 317) 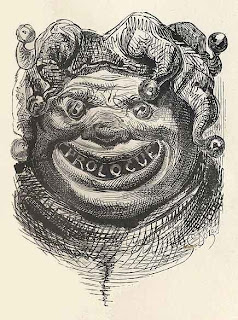 On the grotesque in Stravinsky

“ […] he named the piece not simply Petrushka […] but Krik Petrushki, ‘Petrushka’s Shout.’ This krik was a very special genre; it had nothing at all to do with the pathos we now associate with the hero of the ballet. It was just a grotesque noise used at various strategic points during the traditional puppet play. It was the usual means of attracting the crowd’s attention: ‘From behind the puppet screen one heard piercing, nasal shrieks, groans and random snatches of tunes sung in Petrushka’s voice, and just as expectation is about to flag and the public is about to let itself get distracted by its surroundings, petrushka suddenly appears from behind the screen and shouts, ‘Greetings, kind sirs!’” It was also the howl of physical pain with which many scenes reached their culmination […]”

Richard Taruskin, Stravinsky and the Russian Traditions: A Biography of the Works Through Mavra (University of California Press (1999)

Dr Ian McCormick
Dr Ian McCormick served as a University Professor. Most recent publications are "The state of play: transgressive caricature and transnational Enlightenment" in the book "TransGothic in Literature and Culture", ed. Jolene Zigarovich (Routledge, 2017); The Art of Connection: the Social Life of Sentences and 11+ English (Quibble Academic, 2013, 2014); a chapter in Sex and Death in Eighteenth-Century Literature (Routledge, 2013); a new critical edition of Shakespearean Tragedy. Awards and Prizes include King James VI Prize (1989); Lawson Memorial Prize (1985); British Academy Major State Research Studentship (1990-93). Ian's work has been featured on the BBC (Radio and TV); in the Times Literary Supplement, The Observer, The Guardian, Time Out (London), and in academic journals. He has organized two international conferences for the British Society for Eighteenth-century Studies, at the University of Oxford and two International Community Film Festivals. Also Vice-Chair and Trustee of Birmingham Ethnic Education Advisory Service.